Erectile Dysfunction (ED) is a type of male sexual dysfunction characterized by the inability to maintain an erection long enough and firm enough for sexual intercourse. It is sometimes also referred to as impotence, but that term is a bit outdated.  While most men will have occasional difficulty achieving a healthy erection during sexual intercourse, ED is only considered a possible medical explanation for these symptoms if erection difficulties have been affecting a man for an extended period of time. When blood flow to the two chambers of the penis, known as the corpora cavernosa, are blocked or restricted for any reason, this can result in ED.

Men worldwide suffer from erectile dysfunction due to physical, psychological or emotional reasons. Many of which are seeking a natural, ED solution with long-term results. What causes ED? There are many causes of impotence both medical and psychological. Often, age is a predominant factor in erectile dysfunction; however, your chronological age is not solely responsible for ED’s development. Men over the age of 40 typically experience ED as the result of inadequate blood flow to the penis, most often due to the narrowing of blood vessels. This can arise due to many causes including:

The most common cause of ED is a lack of flowing blood to erectile tissue. Plaque and damaged vessels can restrict circulation enough to disrupt function. Typically, symptoms begin with difficulty maintaining an erection before advancing to a complete inability to obtain one.

The production of testosterone and other hormones naturally decreases with age, and this can disrupt erections. Also, in rare instances, kidney failure and liver disease may throw off the balance of hormones necessary for proper erection and intercourse. In most cases, testosterone replacement therapy can bring levels of the hormone back to normal.

Obesity or lack of physical activity

Engaging in an active lifestyle can help with weight management, stress, anxiety, and depression – all of which help with other conditions and decrease the risk of developing ED. The accumulation of fat in the body can cause a drop in active testosterone levels. In addition, being overweight can cause cardiovascular problems that are known to contribute to ED.

More than two drinks a day is considered a risk factor for ED. Alcohol can lower testosterone levels, decrease flowing blood to the penis, and cause nerve and hormonal imbalances. Low testosterone from alcohol or drug abuse can also affect your libido and performance, potentially leading to further psychological ED complications.

The hardening of the arteries associated with smoking tobacco can reduce flowing blood to the penis. Smoking also results in oxidative stress – another risk factor for erectile dysfunction. Fortunately, quitting smoking has shown to relieve much of the ED risks associated with the habit.

The pressure applied to the pelvic floor during these activities can result in nerve and vascular damage that may inhibit erections.

A German study found that 69% of men involved in a sleep apnea study also suffered from ED. Disruptions to breathing during sleep affect oxygen levels in the blood, which can cause problems generating an erection. Lack of sleep also disrupts hormone production.

Stress, both in and out of the bedroom, can make it difficult for a man to achieve an erection. Depression, anxiety, and the medications to treat them may also contribute to impotence.

We use a clinically proven technique called Platelet Rich Plasma Therapy to produce better quality erections and enhance sexual pleasure, without the use of chemicals, drugs or surgery.

What is platelet-rich plasma or PRP?

It is a portion of your blood that contains healing elements and growth factors.  To create PRP, your blood is drawn and the platelets and growth factors are separated from other cells with a special centrifuge. Using a patent pending technique, the PRP is injected into the penis using a very thin needle. You will experience little to no pain, as the entire area is thoroughly numbed with a topical anesthetic. The growth factors in the PRP from your own blood stimulate increased blood flow to the penis, resulting in stronger, harder, bigger erections. Most men also experience enhanced length and girth.

Hundreds of men have benefited from this procedure, and since PRP is derived from your own body there have not been any reports of significant adverse effects. Dr. Ebanks is one of a select group of physicians trained to perform this breakthrough, safe and effective procedure.

With the PRP you can expect:

The procedure is accomplished in less than 45 minutes, is delivered with little to no pain or discomfort, requires no downtime and can be effective for 12-18 months.

If you are a man over the age of 30, chances are, you are not performing as well as you did in your 20’s. Over 50% of men experience some degree of erectile dysfunction in their lifetime.

There is a male enhancement treatment at Alternity Healthcare in West Hartford, CT that can significantly reduce this risk of experiencing ED and improve your performance without the risk of side effects, surgery or the inconvenience of taking daily medications. It’s called Acoustic Wave Therapy, and it is based on a widely tested method of male enhancement called shockwave therapy. Doctors in Europe have been testing its effectiveness for Erectile Dysfunction and Peyronie’s disease for the past two decades. They have found that pulsed acoustic waves improve blood flow in the penis and even repair damaged nerve endings resulting in peak sexual health, including sensitivity, and performance.

Erections are an important part of a man’s sexual health. Most men suffering from decreased erectile performance, or ED, have diseased blood vessels in the penis causing restricted blood flow, and therefore, have difficulty getting and maintaining erections. Men may also notice symptoms such as decreased hardness, sensitivity, and ability to perform.

As over 50% of men ages, 40 to 70 are suffering from symptoms of erectile dysfunction, many men in their 30s are reporting decreased erectile function. The leading cause of erectile dysfunction is poor blood flow to the penis, which causes softer erections, inability to achieve an erection or unsustainable blood flow that leads to men prematurely losing their erections during sex. Whether your symptoms are subtle or more severe, Acoustic Wave Therapy can keep you on top of your game for years.

The Performance Benefits of Acoustic Wave Therapy include: 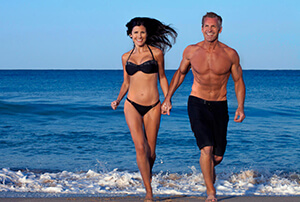 As Acoustic Wave Therapy is a non-invasive sexual performance therapy, allowing men to maintain their best performance, and with routine treatments, men can avoid any signs of declining sexual function.

Procedures take as little as 15 to 20 minutes and are completely non-invasive, drug-free, and surgery-free. Don’t wait for your best days to pass you by,  Contact us today to arrange a consultation.

Acoustic Wave Therapy and the P-Shot can be combined for the ultimate performance enhancement!

I was diagnosed with erectile dysfunction in my late forties. After nine years post-divorce I started dating again and my anxiety was enormous facing that “moment of truth” with another women. I met with Dr. Ebanks in hopes that Acoustic Wave therapy would increase my blood flow to the area and allow me to return to a normal sex life. Acoustic Wave is an investment, but Dr. Ebanks took the time to evaluate me as a good candidate for the procedure. After six treatments I’ve had great success in my first sexual relationship. With Dr. Ebanks’ help this has been literally a lifesaver me.  I highly recommend setting up an appointment with him at Alternity Healthcare to explore your options if you suffer from erectile dysfunction.

For most men over 40, declining testosterone can have a negative impact on how you look, how you feel and how you perform;  in and out of the bedroom.  Sexual desire or libido, is directly impacted by testosterone levels.  Men with low or declining testosterone levels frequently have trouble getting and maintaining a good quality erection that allows for satisfying sexual intercourse.  Studies have shown that testosterone supplementation results in increased libido and a higher sense of well-being.  Erectile quality also improves.

While testosterone therapy alone is usually not the fix for ED, because ED can have many different causes, it is a vital component for being a healthy, virile man at any age.  As such, it is critical for optimal sexual function.  Restoring testosterone levels to an ideal range  has numerous health benefits:

More detail are available in my book:  “The High Performance Male —High octane strategies to accelerate performance…in and out of the bedroom…for men over 40”

It can be embarrassing to talk about problems in the bedroom. For men, erectile dysfunction (ED) and premature ejaculation (PE) can really interfere with a healthy sex life.

Have you noticed that it takes longer or requires more stimulation to achieve an erection? Maybe your erections are not as firm or as large as they used to be, you may lose your erection after an orgasm more quickly, and it could take longer before another erection is possible. A certain degree of physical change comes along with age. But putting age aside, there are things that can cause the same symptoms, like the stress at work and just the demands of everyday life. Luckily, there are a number of effective therapies including Acoustic Wave Therapy and the P-Shot.

Acoustic Wave Therapy uses pulsed acoustic waves, known in Europe as extra corporeal shockwave therapy, to address the root cause of poor sexual performance for men – poor blood flow. By expanding existing blood vessels in the penis and creating new avenues for more blood to flow into the penis, Acoustic Wave Therapy produces healthier, fuller and more sustained erections for men with and without erectile dysfunction. Results for this type of therapy have been shown to last up to two years (NCBI), much longer lasting than the typical ED treatments

A Safer Alternative to Viagra

Among the most popular ways to treat erectile dysfunction, oral medications such as Viagra, Cialis, Levitra and others in that class of medication are relied upon too much, and often cause unwanted side effects, such as nasal congestion, headaches, upset stomach, vision changes, facial flushing, and dizziness. They also only serve as a temporary ‘band-aid’ solution, having to be taken before intercourse. Young men are turning to these drugs for performance, leading to dependence causing sexual dysfunction.

While oral medications for erectile dysfunction can be effective for temporary relief of the symptoms of ED, they don’t target the root cause of most patient’s ED and can often bring unwanted side effects. They do not work for everyone and are not indicated with certain medical conditions.

Intracavernous injections, like TriMix, can be a very effective treatment for ED and PE.  The injection into the penis triggers an automatic erection.  You are taught the proper technique to perform the injection 5 – 10 minutes before sexual activity and should last no more than one hour.

Another option is a fairly new peptide, PT-141, that works differently than any other ED treatment.  Rather than working directly on the vascular blood flow. PT-141 stimulates the part of the brain associated with sexual arousal.  It is injected under the skin in the abdomen.  It can take 4-6 hours to become effective but lasts 6-12 hours thereafter.

Reaching your climax too fast leaves both you and your partner unsatisfied. This can happen to men at any age. In fact, many men live with the shame they feel because they are too embarrassed to discuss it with their doctor. Up until now, most treatments have been ineffective using topical numbing creams or antidepressant medication.

At Alternity Healthcare, we have developed sexual enhancement programs that improve and restore your potency and function to enable you to have the most gratifying sex of your life.